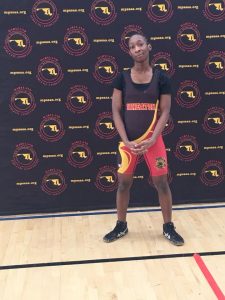 She came, she saw, she conquered, she brawled! Wheaton High School’s Constance Nwegwei has become the very first MPSSAA Girls State Tournament Champion at the 102 pound weight class. Connie pinned three of her four opponents within :30 and defeated her final opponent with a 10-3 decision. Connie has a 15 win 7 loss record this season and is currently on a 7 match win streak.

This was the first ever MPSSAA Girls State tournament. The tournament was held at Northeast High school in Pasedena, MD. Girls from several teams across the state, including several from other MCPS teams, gather to compete against each other in a Madison style tournament. Connie hopes to ride this momentum into MCPS County Championship where she will represent Wheaton at the 106 pound weight class. Good luck Connie and GO KNIGHTS!

No Events This Week

Events are added by athletic staff.
View All Events